Cristiano Ronaldo Jr. scouting report and ranking his chances to succeed his dad

How long do we have to wait before we see another player as phenomenal as Cristiano Ronaldo? Hopefully not long. Perhaps his son Cristiano Jr. can step in and take his place.

Reeling out Ronaldo’s achievements will require you to catch your breath multiple times. That’s all we mere mortals can do when faced with such a colossus – talk.

It all points to some pretty gigantic shoes Ronaldo would leave behind whenever he retires. Who can become the next Cristiano and fill it?

On July 3, 2010, Ronaldo announced to the world he had fathered his firstborn with an unknown surrogate. However, Cristiano Ronaldo Jr. was born on June 17, 2010, in San Diego, California.

There was never any doubt Cristiano Jr. would take up football. The game is infectious, one simply has to be around it long enough to catch the fever. Cristiano Jr. was born into it!

In the movie Ronaldo which premiered in 2015, Cristiano Jr. is seen telling his dad he’ll prefer to be a goalkeeper when he grows up. Ronaldo didn’t take that lightly. The bottom-line was, Cristiano Jr. was always going to be a footballer. Goalkeeper or not.

Turns out Cristiano Jr. is an attacker just like his father. We caught a glimpse of that after the 2017 Champions League final which Real Madrid won. Cristiano Jr. emerged on the pitch for some knockabout with some kids [probably of other Real Madrid stars].

Cristiano Jr. is seen in this viral video dribbling through a couple of kids in white before rounding off the move with a simple finish. That seems a long time ago now.

Cristiano Ronaldo Jr. could be a star in the making (via @YorchJPI) pic.twitter.com/jkxHIhSXMK

When Juventus signed Ronaldo in 2018 for £99 million, they got one more Cristiano free. Cristiano Jr. has been with the Bianconeri under-9s and is arguably their best player and scorer.

In September 2018, Cristianinho, as the younger Ronaldo is fondly called, marked his Juventus debut by bagging a quartet of goals. This was at a time when Cristiano Sr. was struggling to find his scoring boots with Juve’s senior team.

In April 2019, Cristiano Jr. travelled with Juve’s youth team to Madeira, Portugal, Ronaldo’s birthplace, and was filmed scoring a record seven goals in 45 minutes against the age-grade team of Maritimo China. The game ended in a 25-0 rout to Juventus.

Cristiano Jr. scoring record is no fluke. The nine-year-old is addicted to finding the net-like his father. His stats will leave you in awe, apprehensive maybe. But there’s no doubt about the immense talent of Cristiano Jr.

Games: 28
Goals: 58
Assists: 18
If scoring could be a genealogical trait, then it certainly runs among the Ronaldo’s. Last December, Cristiano Jr. plundered three goals for Juve Under-9s to help them to the Cavour Trophy. His efforts earned him the best-scorer award. And his dad was proud to share.

Can Cristiano Jr. replace his dad?

The answer is a big MAYBE.

Despite his robust skill and scoring prowess, Cristiano Jr. still has a long way to go before he can be considered worthy of stepping into his dad’s gigantic shoes.

Ronaldo said to beIN Sports in 2019: “I hope that Cris, my son, can be like his dad. He says he is going to be better [than me], but I think it’s difficult.” 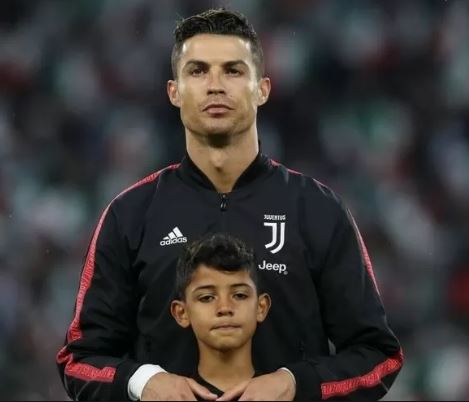