Could Cristiano Ronaldo Jr be as good as his dad?

The 33-year-old Portuguese forward has averaged nearly 50 goals a season in nine years with los blancos which is, quite frankly, utterly ridiculous.

But, as Ron enters the twilight of his career, people have started daring to imagine a football world without CR7’s incredible goal-scoring exploits. What would the beautiful game be like without one of its greatest showman?

Well, it seems as though the five-time Ballon d’Or winner has been hard at work crafting football’s next superstar through his son, Cristiano Jr.

He’s only seven years old, but Ronaldo’s lad has shown off some impressive skills. However, when you consider that his dad is essentially his personal trainer, perhaps it’s not that much of a surprise.

Check him out here swerving in and around defenders before slotting the ball home in front of a jam-packed Bernabeu during a break in the Madrid derby.

Mini-Ronaldo was also snapped trying to recreate his dad’s iconic bicycle-kick goal against Juventus from the Champions League on the weekend. 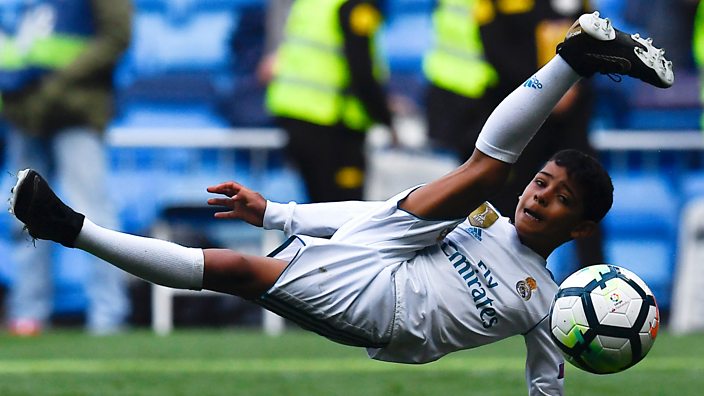 Not a successful attempt by the looks of it, but nonetheless, it appears Cristiano Ronaldo Sr is trying to future-proof his goal-scoring legacy through his son. Even now, Cristiano Jr may already have the skills and the potential to match his father’s accomplishments.

Here are a few other characteristics from Ronaldo Sr’s skillset that are rubbing off on his son.

Going hard in the gym
Cristiano Jr usually drops in for a casual gym sesh alongside his dad.

Those are some serious gains from the kid, and it seems his dad is the one showing him the secrets.

And if you’ve ever seen the size of Ronaldo’s gargantuan thighs, you’d know he never skips leg day, which is why he’s here building those quads on the treadmill with Cristiano Jr.